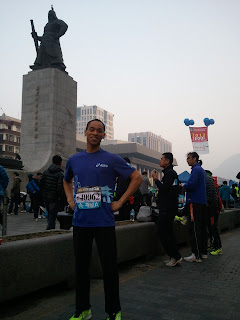 My second marathon in my life.  Seoul International Marathon 2012.  I would’ve thought I would run another marathon, and in Seoul for that Matter??   God is so good.  There were some amazing things I saw and discovered while there.   In the first few kilometers I was telling God. “God  I’m ready to quit, I’m tired, I don’t know why I’m doing this.”  But then He helped to remind me of all the people who are supporting me, and on occasions, right when I wanted to give up there was someone who ran next to me and said, “Fighting” or good job!  I was very happy about that and was given enough encouragement to continue on.  There were also the crowds on the side.  I remember one man who just stood there and clapped each of us on!  It was incredible, I felt like he was the hero not us, he was the one given us strength to continue on.   One little girl on the side also looked at me and yelled “Good!”  I was encouraged by her words.
There were also runners who were very inspirational.  I remember as I was running I saw a Korean man run past me, he had no arms, but he was doing so well.  I immediately looked at my arms and realized that it is a privilege to have our arms and our legs.  He was using what God gave him soo well!  It was incredibly inspirational for me.

I became completely exhausted close to the half marathon.  I was seriously considering a half and stopping with that.  I thought “Yeah,  a half is ok.”  But then I knew id have to explain that to those I said I was running the full marathon, also once I crossed the half there were bananas and water.  Once I ate the bananas and drank the water, I was full of more energy and I encouraged myself saying, “I feel good”  “Now the marathon starts!”  Forgetting what was behind and pretending that I just started a half marathon right there was extremely helpful for me.  That was when I started passing people (from that time MANY MANY people were passing me because I was in the front with a lot a good runners, that was apart of the discouraging part, but my own encouragement was so helpful)

I want to say thank you so much to Ryan, Emily, Mike, Ian, Denise, and Jessisca for coming and supporting.  If it wasn't for them who knows if I would have finished the entire marathon!  Jessica incredibly surprised me.  She washed my feet.  Both of my feet she washed.  She walked with me though I was walking so slowly.   I was privileged to be the first friend she knew that finished a marathon.   Ryan gave me a huge hug and Mike was with me in the beginning and prayed with me before the race.  I saw Denise and Ian at the finish and Jessica had made me a sign cheering me on!  I was so thankful for my friends.  So thankful for them.

Like I said I never thought I would finish another marathon.  After running my first marathon last year.  I couldn't even run a mile.  I cried because it was so devastating to me.  I prayed that I would be able to run again.  Slowly especially when summer began I was able to run more distance again..soon 8 miles, soon 10.  I was so encouraged.  And this year in Korea I had been able to run everyday, I can count on my two hands how many days I had missed running this year.  I’m very thankful for that. I'm expecting great, great things for the year 2012!

Posted by Jeremy and Kayla's Prayer Room at 9:33 PM