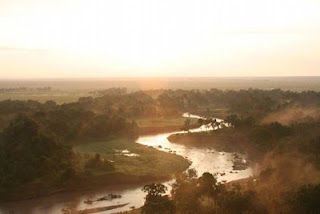 The first divinely called foreigner was Abraham (and every descendant of faith after him).   Abraham was sent into a land for the divine purpose to bring a new culture to everywhere he walked.  Now, we have been called to be a people who brings a new culture to a new land.  We bring divinity to a culture of thirst for something new which God longs to bring to His people.  Behold, he says, "I am doing a new thing!"  And He wants all people to see it not to our glory but to the glory of His great and Might name!   We saw this in new nations such as the United States, Australia, New Zealand and even (the beginning of the African continent and) South Africa (which for me was a new discovery and I believe people are beginning to see world-wide), but because of the people there but because God wanted to do a new and amazing thing.   We are placed in a land to be new culture makers, not a culture of our own entirely, but a culture birth in Christ and shining in the uniqueness of each of us.   We are called to be new culture makers.  Let live in that today!  :)
Have a blessed day! :)

Posted by Jeremy and Kayla's Prayer Room at 12:04 AM