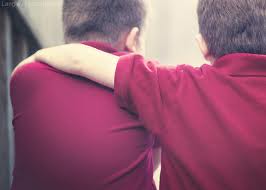 Often times (In fact I would say every time) when we have conflicts, it's important to note that  usually our conflicts have nothing to do with that person directly, but everything to do with us: the development of our own character and what God is trying to do in and through us to change us and grow us.

Genesis 9:20-23
20 Noah, a man of the soil, proceeded to plant a vineyard. 21 When he drank some of its wine, he became drunk and lay uncovered inside his tent. 22 Ham, the father of Canaan, saw his father naked and told his two brothers outside. 23 But Shem and Japheth took a garment and laid it across their shoulders; then they walked in backward and covered their father’s naked body. Their faces were turned the other way so that they would not see their father naked.


1 Peter 4:8
“Above all, love each other deeply, because love covers over a multitude of sins.”


What was Ham’s mistake?  He told his brothers .  Often times we learn about the sins of others involuntarily.  The question isn't what the person did (which if we're not careful, can usually get us caught in that), but most importantly, it is what we decide to do with that information of our brother or sister's weakness that will determine and reflect what kind of person we are striving to be.  Ham was not wise in this.  Noah had authority from God to bless or curse Ham's future.  In Ham telling his brothers he was hurting himself  by not considering His father in love and protection and care.  We must remember that God places on high or brings down low others.  God can give that person the power to put you low the very person you choose to ridicule behind their backs or in their face. Most of the children in my academy where I teach are wonderful, and then there are some who are the most disrespectful I've seen.   I made the mistake of tagging along on their jokes and they turned them around trying to speak badly about me.  I learned a lesson from this.  Don't sink down to their level no matter what.  Infact, I am partly thankful for them because they forced me to have the view of the higher man.   I am reminded that it is because they feel inferior that they behave the way they do.  I realized that an inferior person thinks like an inferior person, but a hero thinks like a hero.  Ham's behavior was that of an inferior, and Ham's brother's were that of a hero protecting another who was their father.  When Noah discovered this, Noah pronounced these brothers just that way!   When seeing people’s short comings we must be careful to humble ourselves, see ourselves in their situation and then seek to protect our brothers and sisters or whoever in love.  Thankfully there is forgiveness and complete restoration and power for overcoming in Christ Jesus.  If you've made a mistake, Christ can not only cover it, but He will use it to your advantage and bless you even more in the way only He can give, if you repent.  This is what I learned:  Everyone is important because they are important.
To observe the best example here, let's look closely at what Ham's brothers did in this situation.  1, Ham’s brothers took action and they covered their father’s shortcomings.   They refused even the knowledge of knowing their father’s short coming and shame.  When Shem and Japheth heard from their brother, they immediately took extra effort to take a garment and laid it across their shoulders, and then they laid the garment over their father.   Walking backwards, their faces were turned the other way so that they would not even see their father’s nakedness.   Be careful about the things you see, on television often times you are seeing people’s voluntary and involuntary shortcomings as it makes good entertainment which I believe that 80% of viewers of some of these television shows are people of a Ham-like spirit;  They want to see things that are none of their business and tell others for whatever reason, but the Bible says we have enough business of our own to handle to take other peoples business in the atmosphere of our home.  Our home should be like a beautiufl wine glass marked with the names of those who live in it.  When we allow things that our not our business in it, it is like mixing mud with our sweet pure sparkling wine.  You have the sparkling wine.  All other information, is just mud; it doesn't belong.   Many people find they can't handle their our own business sometimes let alone others, that might be because they are interested in mud. Let’s be careful of this.

What did the brothers do?  They gave no attention AT ALL to their father’s shame; they knew it not.  What did they do?  They thought about how to protect and honor their father in his weakness and shortcoming.  This took work.  They walked in backward.  Protection:   How did their brothers show protection for their father?  I think the key here is these brothers' focus; they asked themselves about themselves in light of their beloved father, “How can we honor our father?”  This was not about them or about Noah, it was about honoring God in all things, which is what we are all called to do in all situations.   Whether a conflict or a triumph, we can honor God through it.  In conflict we often times get caught up in the other person's behavior and we think on the surface, but the conduct of others is not about them; it’s about us and how we act or react which can make the difference.

Honor takes not many words nor thoughts, but much prayer and action in love.

Proverbs 10:19 reads, “When words are many, sin is not absent, but he who holds his tongue is wise.”

I want to tell you:  Honoring others takes prayer and action, not thoughts and words.   We don’t need to spend much time in conversation / thought about the situation when it comes to conflicts.  When we come across the attitude or actions of a person, remember this:  their shortcomings are being revealed in front of you.  What are you going to do?  When someone is angry, or tells a bad joke, or is being insulting, their shortcomings are being revealed in front of you.  What do you do?  Let me encourage you to pray.   Pray for an opportunity to tell that person face to face, one on one, love on love. You can pray this prayer:  Father, help me to grow in showing love by honoring and protecting this person who revealed their weakness in front of me.

God chooses to use conflicts to help us grow in his character and to reveal His glory out of it.
Students in my academy where I teach are often times tired and hungry from studying and not eating the entire day.  So when they get candy or something to eat from the teachers, its a really big deal; but yesterday, a student complained after I gave her a chocolate, I realized that this is just the way some people choose to be, this is (unfortunately) who she chooses to be.  Our writing topic that day was:  Would you want to be an employee under an employer or would you want to have your own company and employees.  There were 5 students. Two of them chose "employee", one of them chose "employer".  The topic was very interesting.  I was gently encouraging all of them to be an employer because they also have good ideas.   At the end of class after I gave one of them chocolate and the girl who chose to be an employee complained that I didn't give her the chocolate to her sooner, I realized that people not only choose the career they are going to have, but they also (whether they know it or not) choose the character of such a job.  Lower class jobs also require lower class thinking and people have all the right to choose to be in such a position, but I want to encourage everyone who hears this message.  That is not for the people of God.  We are people of higher standards.  We are people who chose to love, who choose to bear fruit; in fact, we have been hand picked and chosen to bear fruit in our lives, in every area, including our relationships.

Conflicts arise only to enrich you.   Know this, for every conflict that arises they arise because there is something you have that needs to be released whether it be an honoring spirit you need to give out, or a humbling spirit, a patient, loving spirit of honor so that God may be honored through it.  When we come across a conflict ask God what to do and then do it.

Sometimes you cant act immediately, but that may be a time for quiet prayer.  Sometimes you may have to share with someone a conflict you have with someone else, one person whom you trust in a spirit of protection we can share; sometimes leaders who are mature need to know these things so they can pray and lift you up in prayer under the garment of honor as God’s people pray with an empowering prayer that sets the captive free and builds up the Body of Christ even greater. That is great.  Ham wasn’t acting under that motive, but Ham’s brothers though they both knew about their fathers event were.  They acted immediately in a behavior of honor alone for their father.

Remember, the conflict is not about them at all, it’s about you and obedience to God.  You are responsible for you, not them. You take care of you and God will do the rest.  In class, we stopped and talked about what makes a good classroom.  The answer is: Everyone.   The question isn’t:  Is the teacher fun, interesting, worthy of listening to.  The question is:  Am I a respectful person, Am I an honoring person, Am I a good listener, do I show the characteristics of an honoring and enriching individual.  Everyone has this potential and given opportunities to release it each day.  I thank God that we have a sense of growing in personal character through our conflicts, honoring and uplifting our brothers and our sisters in loving them in a way that brings honor and glory alone to God alone.  May we grow in character as God-honoring in the presence of others and while we are alone.
Posted by Jeremy and Kayla's Prayer Room at 7:53 PM