The Parable of the Boy with the Banner 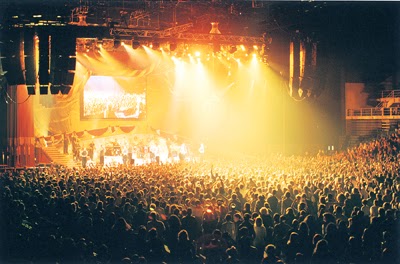 There was a boy who went with his father to a Van Halen rock concert.  The boy was so excited, as he packed all the stuff for the concert.  The boy couldn't remember the name of the band because he and his dad had gone to so many concerts to see bands together.   The boy had a stack of banners with the band's different names on them; his favorite part of the concert is always when his dad would put him on his shoulder to raise the sign up as high as he possibly could.  Sometimes, when he's holding the boy up high if other people think the sign is really cool, they'll help to raise the sign higher and it's really cool when the band sees us.  It was time to go but the boy was so excited he forgot which name of the band he was going with his dad to see, and his dad had given him a bunch of banners over the years, so the boy just took all the banners he had and jumped in the car.

It was time!  Right in the middle of the concert, at the coolest song of the evening.  The boys dad turned to him and said with a cool look, "Are you ready?"  The boy smiled and took out his book bag of banners.  The first he took out was a Pearl Jam banner and the father said, "Nope, that not going to work, son."  Next he took out a Guns and Roses sign, and the father said, "That's not it..."  Next was a Micheal Jackson banner, and the father said, "I can't lift you up until you have the right sign."  Finally, the boy remember and he took out his Van Halen Banner; Immediately the father took him in his arms and put him up on his shoulders and the boy flashed the sign as high as can be.   When other people saw the sign they liked it so much that people took the boy and raised him up higher and higher, until the band took notice.   Well, this is exactly what happened!  The band saw them at the best part of the song and gave a shout out saying, "Cool sign man!" And it made the boys day.  Great memories of the times his dad would put him up on his shoulders and the boy would hold up the sign was high as he could. Every time it was so much fun to see the expressions on everyone's faces as he held up the signs; they were always really really cool signs.   This was the best of all of them!

If you'd like to accept Jesus into your life today, pray this simple prayer of God's love and grace today: Lord Jesus, I thank you for dying for all my sin; now Lord I invite you into my heart. Come and be my everything today and forever. Forgive my sin as I make You and you alone Lord in my life. Amen. Now read the book of God's love in the Bible: The book of John chapters 1-21. God promises He will guide your life. Pray and ask God to bring the right people into your life. God will guide you to the right church full of people who love His words in the Bible. Our God is so faithful. God bless you today.
Posted by Jeremy and Kayla's Prayer Room at 8:23 AM