Because That's What REAL men do!

That's What Real Men Do

This morning after a run I went to go take a shower and I noticed that the detachable shower head was always facing in the direction that the shower doors opened.   So when you turn on the shower head all the water comes running out of the shower area in onto the floor next to the door.

As I was trying to adjust it I was very tempted to start thinking to myself, complaining really, that it was my wife who was the last one to adjust the shower head (because she had just finished giving our daughter a bath, being the wonderful mom she is) and I was tempted to complain about her and then I heard the enemy try to say things about her character and the things that she does and etc.

But then I also thought arrogantly on my high horse about poor me having to adjust a shower head in the morning!  But, then at that moment a MIRACLE happened!  I actually thought about myself and thought why don't I just adjust the shower head. And then my arrogant self thought, "well would she just mess it up again?"  But then I realized that it's not my wife AT ALL who is the problem in this scenario! It's not me!  It's the shower head!!!   And then I thought to myself, What do real men do?? Do they blame their wives for the problems around the house??   Do they find problems and look for someone to blame?? Oh, and of course, then they, being high on their horse and arrogant, think, "Oh, poor me because of all these people beneath me!?  Absolutely not!  So what do real men do??

This is what God did when He saw that you and I who were sinners and could never pay the debt that we had.  God was tempted to but he did not just complain about us.  He did something about it! He changed the Playing field for us!  He set up things for our success!  He made it so we can be all that we were created to be!  He sent his only Son so that he can make it easy for us to come into salvation and back into the family!  Because THAT'S WHAT REAL MEN DO!  That's what real men do.  That's what a real God does! Stop looking to gods that can not hear,  can not see, can not touch, can not feel, can not love, and therefore, can not save you!  A real GOD is POWERFUL enough to change the environment and make it a successful playing field for you to be united with Him and be all that you were made to be together!

God gave us men the power to change the playing field for our families to be successful!  I believe God gave women that same power!  But as for me, that's what real men do!  So that is what my prayer is for you today. Stop complaining about your wives and your children.

Be the husbands, be the fathers, be the men of God that you are called to be! Stand up and change the playing field for them. But before you do that buy a new shower head for that dang shower :-) 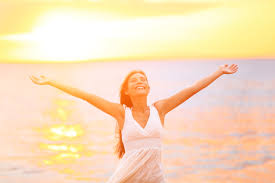 The Power of Words
By Kayla Holloway, August 8th, 2019


"Truly I tell you, if you have faith as small as a mustard seed, you can say to this mountain, 'Move from here to there,' and it will move. Nothing will be impossible for you."
Matthew 17:20

A few Sundays ago I heard a pastor speak on the power of words. I thought, "An all familiar message often found in the Christian sermon world..." At first I wanted to brush it aside thinking, "I've heard it all before... I get it.. words are important..blah blah."But thankfully the power of Holy Spirit whispered and said, 'pay attention Kayla. There's more here..'

Minutes, maybe even seconds later, I received a new revelation of what the power of words means. I used to only hear this "power" only from a negative standpoint.  Still today, I think we focus too much on the negative power of our words and not enough of the positive power of our words! When we speak with the power and authority that we have as believers, there is kingdom to be won back from the enemy! There is life to be built, prophecies to be spoken.

"Truly I tell you, if you have faith as small as a mustard seed, you can SAY to this mountain, 'Move from here to there,' and it will move. Nothing will be impossible for you."
Matthew 17:20

God's Word has the words that blow up obstacles and barriers that are keeping us from the destiny and purpose God has for us! When the Israelites defeated Jericho they shouted after they marched. And the walls came a-tumbling down!

Activate the tongue that has been redeemed by Jesus Christ, filled with the Holy Spirit and you will see walls come tumbling down. I believe we are to take what the Lord is speaking in and over our lives and speak it aloud too. That is how we fight well.


If you'd like to accept Jesus into your life today, pray this simple prayer of God's love and grace today: Lord Jesus, I thank you for dying for all my sin; now Lord I invite you into my heart. Come and be my everything today and forever. Forgive my sin as I make You and you alone Lord in my life. Amen. Now read the book of God's love in the Bible: The book of John chapters 1-21. God promises He will guide your life. Pray and ask God to bring the right people into your life. God will guide you to the right church full of people who love His words in the Bible. Our God is so faithful. God bless you today.
Posted by Jeremy and Kayla's Prayer Room at 2:24 PM No comments:

Jeremy and Kayla's Prayer Room
Welcome and stay for a while : ) Get in touch with us and let's chat.
Newer Posts Older Posts Home
Subscribe to: Posts (Atom)